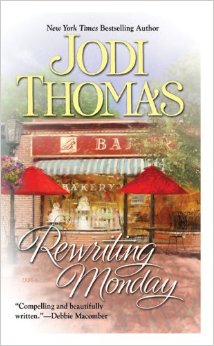 I picked up Jodi Thomas’ latest novel not knowing what to expect. The only thing I knew was that I was in for a good read, and once again, Ms. Thomas did not disappoint. She paints beautiful pictures with her words, creates characters that are so real you feel as though they’re standing next to you, and she has a deliciously wry sense of humor.  Rewriting Monday is no exception.

Pepper Malone, an ex-reporter from the Windy City, is on the run and traveling light. With just the bare essentials (her car, computer and Manolo Blanicks) she ends up in Bailee, Texas – a town without a traffic light. In an effort to stave off starvation and get some money in her pockets she takes gets a job doing the only thing she knows how, as a reporter for the town newspaper the Bailee Bugle. Owner Mike McCulloch doesn’t know why she’d want a job in a town that rolls up its street at 9pm – but he doesn’t really have time to find out. No sooner does Pepper arrive when the story becomes a mystery. Someone is trying to close down the newspaper and kill Mike or Pepper or both.

What begins as a contemporary romance quickly turns into a romantic mystery suspense. I didn’t see it coming, and I didn’t guess who the antagonist was until the very end.

Rewriting Monday has lively, animated, tender secondary characters you want to know more about and the author is obliging. Each one weaves into the action seamlessly creating a robust story that pulls you right in.

I enjoyed this book from page one until the end – and thoroughly recommend it.