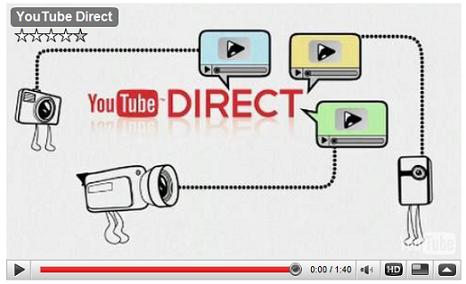 Citizen Journalist – The New Reporter on the block

Got a video recording device?  Congratulations you’re a journalist.  YouTube announced the launch of YouTube Direct, a new tool that allows news and media organizations to request, review, and rebroadcast YouTube clips directly from YouTube users. Let me spell it out for you.  If you have a camera, a phone that records video or a flip device you can record a town hall meeting, a fire, an earthquake, a murder, or take a public opinion poll and upload the clip for use by news organizations.  You needn’t bother learning the craft of journalism, you don’t have to know how to write, it’s not necessary to have ever worked on a video crew before, you just need a recording device that you can point and shoot and you’ve got a story.

What’s right with this picture?
This is the obvious next step in the evolution of using technology to your advantage.  News organizations can now present stories they wouldn’t have had the resources to cover themselves.  It allows them to get breaking news the millisecond it happens without ever sending a reporter or crew to the scene.

What’s wrong with this picture?
If you know me you know I’m not enamored with the news media in general.  You’ll know that I don’t think we receive fair and balanced or even accurate reporting from many ‘respected’ outlets.  You’ll know that news journalist often misquote their sources, and that the more horrifying the headline the better.  What passes for news today in the alphabet soup of 24 hour news stations like CNN, FOX, and MSNBC,  straddles a very thin line between fact and  the ‘host’s’ viewpoint. This is not news; this is cooking up the news.  Its opinion wrapped in a fact or two, with a dash of hubris, a sprinkling of humor, and a smidge of weightiness thrown in for credibility.  Citizen journalist is just the very next step in the evolution of 24 hour news coupled with 21st century technology.

However, I believe citizen journalists may take a step that many journalists wouldn’t– and that’s ‘creating’ the news.  Do I need to remind you of the Balloon Boy fiasco?  His alleged disappearance spread on Twitter faster than you could type 140 characters.  Most people just hit the retweet button.  It was ‘news’ that was spread to hundreds of thousands of people before anyone realized it was TOTALLY MADE UP.   It’s sad, but people do want their fifteen minutes and they want to be heard.  Millions of blogs are proof of that.

As citizen journalists enter the lexicon of our ever increasing all media world – what can we count on to be true?  Considering how far we’ve come from the Walter Cronkite days – how far will we go?  Will we each have our own channel as Twitter, LinkedIn, and Facebook merge?  Will our channels have news we create?  Will I be able to friend someone half way around the world and get their viewpoint of the news, news that is happening in their country?  If so, then we’re creating a world where the news is all about someone’s viewpoint and opinion and not about facts.

We all have opinions, and some of us even have cameras.  It’s a perfect combination for home grown news.  Welcome to the 21st century Citizen Journalist.

What’s your thought?  How do we keep the news from becoming a potpourri of individual opinions? And do you want to?