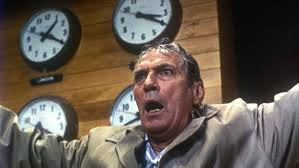 I’m mad as hell and I’m not going to take it anymore!

If you haven’t seen the 1976 film Network, run out and rent it. Right now.

Network is a scathing satire about a fictional television network UBS. This Oscar winning screenplay was written by Paddy Chayefsky. It was unbelievable then and today it’s still almost unbelievable. It’s the story of a news anchor, Howard Beale who after many years of reporting the news with integrity finds his ratings slipping. In an effort to boost the ratings, UBS decides to combine entertainment with news. The once lone anchor reading from a teleprompter looking straight into the camera is replaced by fortunetellers, evangelists, and urban terrorists. Distraught by what he now sees as passing for news, Beale delivers his famous on camera speech urging the viewers to open their windows and scream out into the streets – “I’m mad as hell, and I’m not going to take it anymore.”

When I saw the film in 1976, I loved it. But I never, in my wildest dreams thought we would see anything like what was portrayed in Network on real television. I was wrong. You only have to see what passes for Reality TV to know we are living the film Mr. Chayefsky penned more than 30 years ago.

I bring this up because — well frankly, I’m mad as hell, and I’m not going to take it anymore! Really. What passes for news media should really be called ‘bad news’ media. We’ve always lived in a world of,  “If it bleeds, it leads”, however, I think they’ve taken it to the point of,  “If we can scare the bejeez out them, let’s run with it.”    There are too many people on the news today offering me their opinions instead of the facts.  And those opinions are designed to make us afraid.  What happened to solid journalism?  Where’s the reporting?  Where’s the investigative non-biased journalism?  Not much around these days.  What I do see are more blogs, more opinions and more people telling me to crawl under my covers, it’s a dangerous world out there and you may not make it.

Well – guess what.  I’m not crawling under my covers.  I say get some people who can just give me the facts, and I’ll live my own life thank you very much.  Carpe Diem!