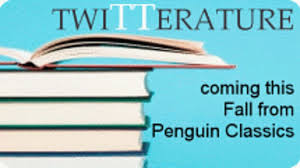 Don’t have time to read Shakespeare? To busy to get through Ulysses? Schedule too tight to get through Dante? No worries, you can get the hyper cliff notes version from Twitterature.

What is Twitterature? Well it’s from the root word Twitter – a micro-blogging site that allows you to speak your mind, discuss your views and give your opinions in 140 characters or less. With such a small window, you’ve got to be brief, to the point, and it helps if you’re clever with the written word. There are thousands of people who are becoming experts at the art of the tweet. But nowhere has the twitter concept been taken to the reductio ad absurdum as when two University of Chicago college freshmen sold their book idea Twitterature: The World’s Greatest Books, Now Presented in Twenty Tweets or Less to Penguin. The book, scheduled for release this fall is part of project created by Emmet Rensin and Alex Aciman. According to reports from the LA Times and Galley Cat, the Twitterature website (which now seems to be under construction) stated that it is “a humorous retelling of works of great literature in Twitter format.” Wait did you hear that sound? That was my head hitting the floor as I passed out in total disbelief.

Rensin and Aciman came up with the idea while sitting in their college dorm. They claim it was an ‘epiphany’. It rather sounds more like a brain fart to me. They created this ‘novel’ idea by first asking themselves ‘what was the grandest venture of our or any generation?’ They came up with two things; literature and Twitter. Literature is an obvious one to me. Twitter, they reason, ‘More than any other social networking tool, Twitter has refined to its purest form the instant-publishing, short-attention-span, all-digital-all-the-time, self-important age of info-deluge that is the essence of our contemporary world. As such, it demands our attention – and gotten it. So what could be better than to combine the two? After all, as great as the classics are, who has time to read those big, long books anymore?’

Well, Messers Rensin and Aciman – you had my attention for 140 characters, ‘had’ being the operative word. Who has time to read those big, long books anymore? Do I really need to comment on this? Come the fall, I’ll be sitting in my chair, by a nice cozy fire, reading a big long book –