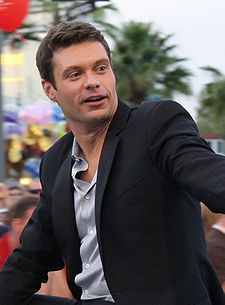 Ryan Seacrest Gets a Raise

Recently Ryan Seacrest, inked a 45 million dollar, three year deal with 19 Productions to continue his duties as host of American Idol.  Really, who can blame anyone for wanting a piece of the gravy train they helped create.  His is the story of taking advantage of being in the right place at the right time.  There are many stories of people who have found themselves in plum positions and didn’t expand on it – but Mr. Seacrest is not one of those people.  He has become an entrepreneur to be reckoned with.

American Idol’s premiere season was something we collectively cheered about – it was fresh, exciting and created a huge buzz.  FOX  had a hit and it was literally music to the producer’s ears.  Along with Simon, Paula and Randy there were two hosts – Ryan Seacrest and Brian Dunkelman.   After the first season Ryan hosted solo and Brian went on to appear in VH1’s Celebrity Fit Club — he lost 15 pounds.

Why did American Idol use two hosts, and how did Ryan become the last host standing?  That’s a question that’s been asked and answered in several different ways, and I suppose we’ll never really know the truth.  I can’t speak for Mr. Dunkelman’s hosting talents, but in my opinion, Seacrest falls short.  I believe a host’s function is to move the show along, and to respond to the ‘cheers’ or ‘jeers’ of the judges with quick, witty repartee that doesn’t leave either the judges or the t talent too scorched.  Most times, Ryan just seems to be wondering what to say next.

Whether Mr. Seacrest is a talented host, is a decision viewers will have to make – but as far as FOX is concerned, he’s obviously as synonymous with the brand as Simon Cowell – otherwise why would any company shell out that many millions for a few months worth of work.  One thing is clear – when Mr. Seacrest found himself in the position of hosting a top TV show – he was smart enough and savvy enough to parlay that into an enterprise.  In addition to his American Idol duties, Ryan is the host of E! News, E!, the annual Dick Clark’s New Year’s Rockin’ Eve and he also hosts several radio shows, On Air with Ryan Seacrest and American Top 40.

Lesson to be learned:  when you’re in a position of power, use your power to branch out.  That’s what Ryan did, virtually making himself a household name, and giving him the clout to ask for 45 million.  He may not be my favorite host, but he gets props from me – because he’s one smooth, smart business man.
Maria out.