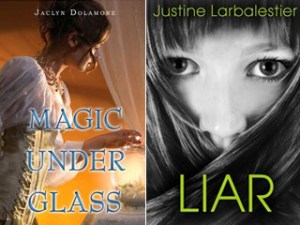 Are the publishers at Bloomsbury Racists?

Last July I wrote a post about the book “Liar” by Justine Larbalestier.  Her young adult novel was the story of a young African American teenager named Micah, yet the book cover featured a white girl.  If you read my previous post you’ll understand more fully why the marketing ‘geniuses’ at Bloomsbury felt it was necessary to put a white girl on the cover.

The point of my previous post was to question whether we were cultivating racism in young readers by not accurately representing a multi-cultural book and instead white washing covers so they sell.  After multiple outcries across the blogosphere Bloomsbury was shamed into changing the cover to more accurately represent  the protagonist Micah. The dust settled, the smoke cleared and publishing went on to sell more books.  Until last week when a similar controversy reared its head – and it came from none other than the publisher that perpetrated the first slur – Bloomsbury.  In their latest publication,”Magic Under Glass” by Jaclyn Dolamore  the protagonist, Nimira is described as having brown skin and considered by others to have ‘exotic’ features – yet the cover portrays a white girl.  Had the publisher learned nothing from the last debacle?  This time, the public outcry was louder and moved swiftly across the internet forcing Bloomsbury to issue the following announcement:

Bloomsbury is ceasing to supply copies of the US edition of “Magic Under Glass”. The jacket design has caused offense and we apologize for our mistake. Copies of the book with a new jacket design will be available shortly.

I am well aware that there are people living in the U S of A who are racist, but does Bloomsbury, a publisher who markets and sells to children and young adults need to support this viewpoint?  What they’re telling children is that it’s okay to write a story about people of color, but it’s not okay to show them on book covers because no one buys non-white entertainment.  Shame on you Bloomsbury.

This blog post is meant as an editorial.  It is my opinion.  But I am curious about what you think?