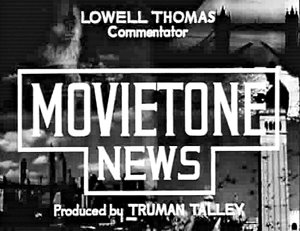 I’m big on time travel stories and when I imagine myself travelling to an earlier time, I can’t quite wrap my wits around how I would survive without my iPhone.  It makes you wonder how people in the early 20th century survived without instant access.  In fact, they didn’t have to, they had newsreels.

Ten minute newsreels aired before the ‘double feature’ and began with world events, followed by stories of national interest.  Typically a segment on fashion, entertainment, or the latest pop culture craze like the hulu hoop or ping pong would round out the reel before ending with a sports segment.  Sound familiar?  It’s the news format of today, or if you separate each segment you’ve got YouTube.

Considering there were no PDA’s, no internet and Twitter was a word associated with a bird – newsreels were a surprisingly swift way to get visual information.  In 1927 when Charles Lindberg took off from Roosevelt Field for his historic trans-Atlantic flight it was captured on film.  The negative was then rushed back from Long Island and later that evening audiences at the Roxy Theatre in Manhattan were able to relive that moment on film.

There wasn’t anything newsreels didn’t capture.  From the Wright Brothers first attempt at flying in 1903¸ to the Great Depression, on through to WWII, Babe Ruth, The Duke of Windsor’s abdication and the Dionne Quintuplets – the men behind the cameras were recording it all and it was being watched by millions in theaters across America.

Today, many cringe at what is posted on YouTube, or seen in the news. Some complain that we’ve become a culture who glorify ‘gore’ and that images are too graphic, but it’s not a new trend and it’s not a result of the internet.  This type of visual, in your face graphic recording was captured by newsreels long before TV News, YouTube or the Internet was a thought in any one’s mind. The assassination of King Alexander of Yugoslavia was explicit, yet it was shown in newsreels throughout the country.  Every moment of the shocking Hindenburg disaster was watched by horrified theater goers.

The technology of YouTube is new, the idea – not so much.  We’re a people that want information, as fast as we can get it, and that’s been going on since man could communicate.