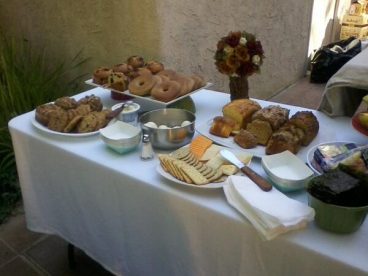 Welcome to the wonderful world of production.  But Before you hit “OK” on that Instagram selfie of you on set chowing down at the craft table – here are a few things you may want to consider as you make that climb up the production ladder.

FOOD IS REALLY REALLY IMPORTANT ON LOCATION OR ON A SET
Don’t be the person who is ALWAYS at the crafty (food) table.  Food is an important part of a shoot.  The crew has been up since before the sun peaked over the East.  They’ve been carrying cases, cameras, lights, props, furniture and in general doing the hustle without any disco music playing – do not be the one person who is at the crafty table stuffing your face.  It just makes you look like you have nothing to do, or that you’re unwilling to help others that do have something to do. Producers who see people with time on their hands see people who are dispensable.

ON SET NO ONE WANTS TO HEAR YOUR OPINION
As much as you have a creative opinion, and we all have them, you are on set, not at some dinner with your friends telling them what you think about life. This is not the place to let it all hang out.  No, really.  In this instance, sharing is unnecessary.  Even if the director flat out asks you what you think- s/he doesn’t really mean it.  What they’re really saying is – “You agree with me don’t you?”

As much as you think you have a better way to do it, or your creative idea is the best, there’s an Executive Producer, Supervising Producer, Field Producer and Director on the set and together they probably have 50-years of experience.  It’s not that your idea isn’t special or doesn’t warrant being heard, but being on set is the time for you to shut up and learn.  Look around, see what’s happening, and who’s doing what.  When your neck is on the line for 3-5 million dollars for a series, then it will definitely be your turn to scream your creative opinion from the top of the Golden Gate Bridge.  Have at it.  But for now, soak it in.  Watch and learn.

DON’T MESS WITH A HOT SET
A Hot Set is a set that needs to be left exactly how it was when the director called cut because they will come back and shoot the exact same set, but for right now the crew is either eating lunch, screening something, working over the script, or shooting something else.  Whatever the case, that set marked with tape or string and has HOT SET written all over it; means do not touch we’re in the middle of shooting and we aren’t finished.  Don’t be the dumb-ass who picks up a pen and paper from this hot set cause you need to write a coffee order. You should have a pad and pen in your pocket at all times anyway.  Unless you’re super nimble and can move your thumbs across your qwerty keyboard as fast as those 15 caramel macchiato orders that are about to come your way.

WATCH WHERE YOU’RE WALKING
This may seem obvious.  Almost like telling someone not to text and drive.  But – I’ve seen it time and time again and I have been guilty of said crime – not looking where I’m going and bam – tripping over something important.  Don’t be the one who trips over the stand holding the light they just spent 2 hours putting in place.  People will give you dirty looks.  Be observant – do not sleep walk while on set or on location.

Enjoy your first few times on set or on location – they can be very exhilarating.  The most important point is to be observant – you’ll learn a lot.  A Lot.