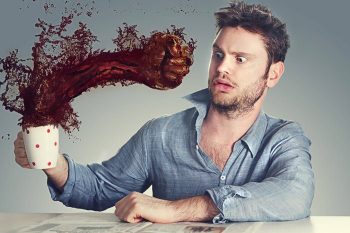 Of late, I’ve been bolting out of bed at 5am because my mind is racing with things that need to be done.  This morning was no different – except my heart was acting like a hammer rather than a muscle, my eye was twitching as if I’d put it on automatic wink mode, and I had a sharp pain across my head.

While making coffee I decide to check my symptoms on the phone. Apparently, Web MD thinks there’s potential for a stroke. So, I put my phone on the counter, grab two aspirins and then follow the websites’ instructions. It states that if I hold my arms out at shoulder level, close my eyes, and touch my nose with one index finger at a time, then I’m fine and there’s no need to worry.

I perform this quick ritual with no problems and pronounce myself clear of imminent danger.

While the coffee continues to brew, I pick up my phone and begin checking emails. Damn! Looks like major creative decisions were made at 2 am. And for a brief moment I think I should have been up to answer them. But before I get too unhinged, I pull myself back to the world of sanity and realize that answering emails at 2am is not normal.

There’s a reason I have these symptoms. It’s good old fashioned stress, brought upon by the wacky world of production.

Ah, finally, the coffee is ready. I take my first sip. Black. No sugar. The first taste is always the best and I spend the rest of the day chasing that sensation, drinking cup after cup until I’m so high on caffeine there’s nowhere to go but down. And that’s when I have a small niggle in the back of my head that says, Maybe I should make some life style changes.

I immediately dismiss the notion. After all, what would I do if I wasn’t in this crazy, constant-heart-pounding profession?

Hmmm…. I wonder if it’s too late to become an accountant?