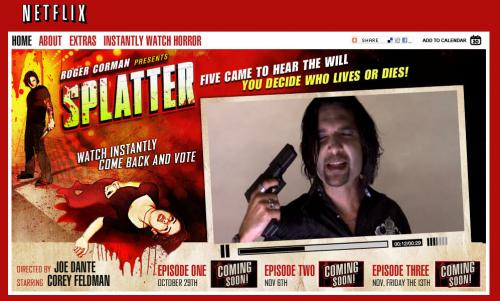 Surviving in the digital age as a filmmaker requires knowing the latest in lenses, cameras, shooting formats and ways to tell a story.  At 83 film director Roger Corman of Little Shop of Horrors and Pit and the Pendulum fame is most definitely changing with the times.  His latest venture Splatter staring Corey Feldman has been picked up by Fireworks International for global distribution.  His three part webisode was originally featured on Netflix in October 2009 and offers viewers the opportunity to select the direction of the series by presenting a number of alternative story lines as the episodes progress.

In an interview with SciFiPulse, Corman was quoted as saying, “We’ve come a long way from trucking 35mm film prints to the drive-in. Now, through the medium of the internet, filmmakers can reach the audience immediately, and open them up to new experiences in interactive storytelling. Viewers can now decide the outcome of the story for themselves—provided the writer and director can present all the options. The devil is in the details, and it’s a new kind of entertainment for a fast-changing audience.”

Take a look at Splatter and decide if interactive story telling works for you.  A word of caution, this series is not for the faint of heart – the title says it all.